The Vampire Community is dead?

All possible jokes aside…is this really a helpful thing to say? I’m all for a click-baity title, but only when it’s relatively harmless…and hopefully, amusing.

The problem that I have with this declaration is that it’s alarmist. There are newer members to the VC/GVC/OVC that don’t yet understand to take all online accounts, reports and declarations with a grain of salt. Those of us who have been around for a while, carry those 10 pound bags of sodium chloride and hand it out to others by the spoonful.

What does it mean when yet another person says that “The Vampire Community is dead?” When someone is dead, we bury them.  (Or cremate the body.)  A reasonable amount of time is spent mourning over the loss of that loved one–we mourn for the imagined future that we can never have with them.  We do not need to be reminded that the beloved is dead and gone, unless our reaction is unreasonable over a prolonged amount of time–and we need this fact repeated to us.

So, by pointing out to us that “the Vampire Community is dead,” is The Messenger telling us to move on, to go on to other things?  Abandon the corpse of the Community and let it rest in peace?  Even though it feels like we have had this conversation multiple times, we probably should discuss it again because of the constant influx of new members–and also, to refresh and clarify our various perceptions on the subject for the present members.  Kind of like a regular Safety Meeting.

As a writer, I understand that sometimes we need to speak in general, sweeping terms.  This is a device I use to make a point or address a particular vantage point–it is a technique that is used to communicate an underlying idea, even if we shouldn’t recognize it as a universal truth.  However, there are other times in which it is extremely helpful and practical to be specific about our topic, subject and piece of terminology.  Of course, this depends on the writer’s agenda and intention in creating that particular piece.

First of all, when we make blanket statements about the Community…what are we actually referring to?  Are we talking about the Online aspect of our Community–the vlogs, blogs, Facebook groups, Discord interactions, websites, forums and articles?  From what I can see, we have quite a bit of activity and interaction.  Are we talking about the in-person House activity?  That would be subject to the individual House.  But, I am aware that we have quite a few open and active Houses and Meetup groups.  How about the social scene?  From what I’ve seen on social media, there is a plethora of activity in the in-person events scene.

So, with all of that activity, I’m going to have to say that from my understanding of the word “dead,” that is not the case with any of the Community factions, as far as I can see.

So….let’s move on to the other aspect, that maybe I define in a different way than The Messenger.

I think of “dead” as describing an organism that is currently engaging in no activity that we would observe as conducive to any of life’s vital functions or passtimes.  There is no lack of activity in the various aspects of the Vampire Subculture.  However, if we are referring to someone being dead in the sense that they are not able to interact with us in the same manner that they did when they were alive–that they are currently unable to be what they WERE for us, including meeting our expectations of what they would eventually BE for us in the future, then that definition might apply to some member’s definition of “dead.”

I have not yet been a long term member of the GVC/OVC/VC.  I am not exactly a new member, either.  I am something in the middle.  I am somewhat familiar with the terminology and basic structure of the Subculture…but, I do not consider myself an Elder, by any stretch of the imagination.  I’ve come in…asked my questions, asked to be pointed in the direction of the most reliable resources, and interacted with other members through online means.  Just as in the Pagan and Magickal Communities, I’ve come up against useless and false information; but I’ve weighed the information that I’ve encountered against my better judgement, intuition, experience and the input of others.  My experience in the online aspect of the Community has been fruitful and rewarding.

As far as an In-Person House, the only experience I’ve had has been with a few friends.  I left them and their House for personal reasons.  I haven’t had a strong interest in trying to find or start another House.  I am more of an online/information personality, myself.  However, I am very aware that there are Vampire clubs and events in my state, should I be inclined to go.  While not easily accessible to me in the physical sense, because of geography [and…hey, Nature didn’t plant a lot of other real Vampires in my area with me…it happens]–I wouldn’t say that the events scene is dead in my part of the country.

So, what’s dead?  Is it because the Community isn’t the same as it was?  What changed…and the better question is, is it valuable to complain about it changing?

I’ve heard other, Seasoned Veterans of the VC mention that the Community has changed from what it was when it started.  My response to this is–how could it not have?  Everything changes.  Organizations change.  The members within it change.  For better or worse, everything in this world changes.  Maybe the Community was “better” at the beginning of the modern scene because it had fewer members and those members were cooler, more sophisticated, more educated….back when everyone wasn’t trying to be classified as a Vampire on the only criteria that they stayed up past 11 o’clock and liked to hang out in graveyards.  I don’t know.  I don’t care.

The Community has seemed relatively consistent since I tumbled into it a few years ago.  Despite it being  (socially) post-apocalyptic with it’s mutants [poseurs, deluded people and role players], I’ve found plenty of survivors [real living Vampires and obligate vampiric beings] within the masses–because I dug for them.  I don’t pine for a lost Golden Age [the late 90’s?], because I never had any other version of the Vampire Community to compare today’s version to.

And on that note of the aspects that I might not agree with or even like in the current version of the VC–I am being and becoming the best CONTRIBUTOR to my Community that I can be.  I write…I offer articles.  I will eventually create video posts.  I will eventually host in-person Meetups.  I will not complain about what used to be good about the Community, nor will I complain about what’s missing.  I will develop myself and help develop others towards the ideals that will help create a better Community, tomorrow.

The Vampire Community is not dead.  And I will not try to stir up drama by alarming members with such declarations.

It might have a lot of blemishes and infections, but some of us are keeping it moving…like a beautiful Undead creature. 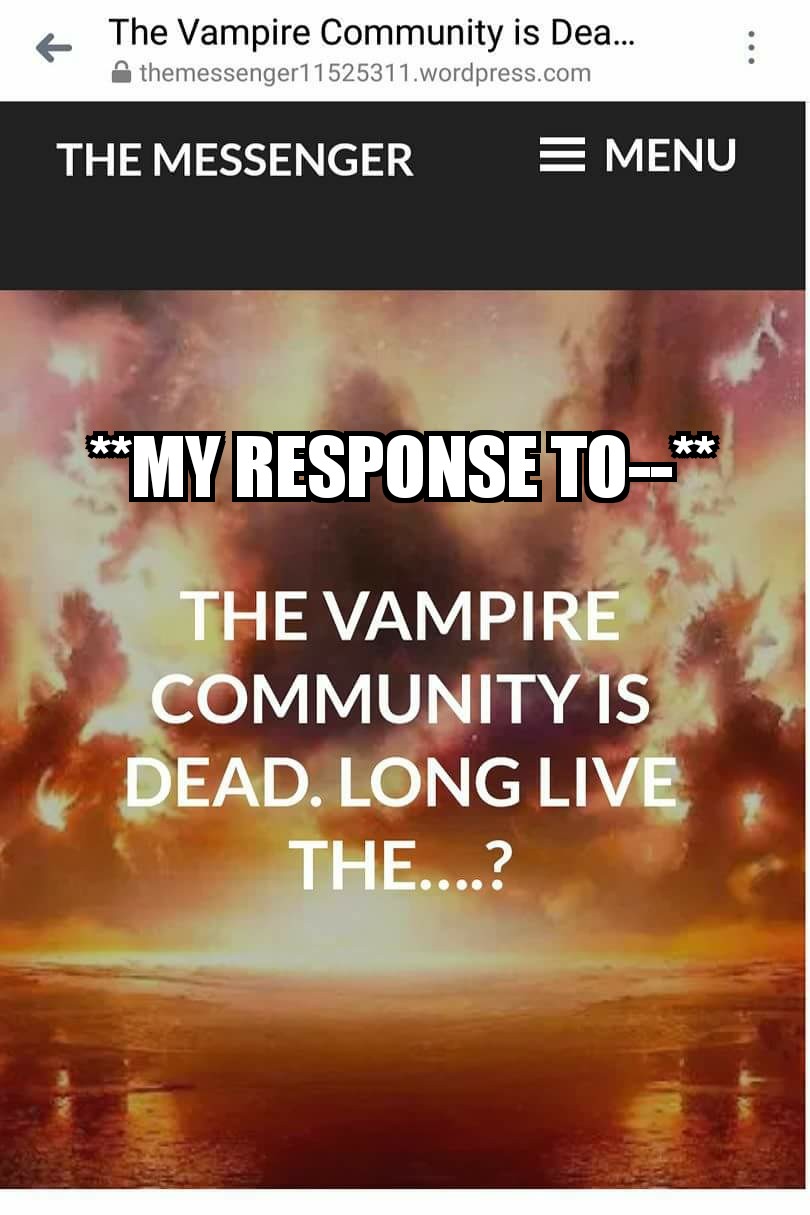